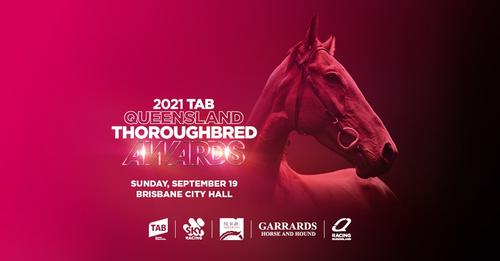 Group 1 winner Vega One has taken out the state’s top prize at the 2021 TAB Queensland Thoroughbred Awards.

The five-year-old commenced his winter campaign with a second placing in the Group 2 TAB Victory Stakes, followed up with his maiden Group 1 triumph, before starting favourite in the Group 1 TAB Stradbroke Handicap where he subsequently ran second.

He was also named the 4YO and Older Horse of the Year at tonight’s Awards.

Gollan’s record-breaking season has seen him claim his eighth straight Trainer of the Year Award, after eclipsing his own state record with 166 wins in 2020/21, as well as again breaking the triple-figure mark for metro victories in successive years with 103 triumphs.

Ryan Maloney capped off another stellar season in the saddle by claiming the Garrards Queensland Jockey of the Year after piloting 119 state winners, including 77 metro triumphs on his way to claiming the Metropolitan Jockeys’ Premiership.

Justin Huxtable, who enjoyed Listed success aboard Rhapsody Rose for master Chris Munce in the Listed Carter Stakes, has been named the Sky Racing Ken Russell Queensland Apprentice of the Year, in a season that saw him chalk up 38.5 winners.

Racing Queensland CEO Brendan Parnell said Vega One was a fitting choice for the TAB Queensland Horse of the Year, joining a list of recent winners including Alligator Blood, Yankee Rose and Buffering.

“Vega One has shown time and time again that he is one of Queensland’s most consistent gallopers, and this award is thoroughly deserving following his stirring victory in the Group 1 TAB Kingsford-Smith Cup,” Parnell said.

“The horse’s trainer, Tony Gollan, has continues to dominate the training ranks, surpassing a number of his own records set last year, including a new benchmark for state wins and an unprecedented second straight season of 100 metropolitan triumphs.

“Queensland has unearthed some genuine stars of Australian racing in the last 12 months, with Krone winning a Group 1 race in Sydney, and rising stars Isotope and Rothfire set to represent the Sunshine State with pride over the coming season.

“I congratulate all award winners on the evening and look forward to another stellar season of thoroughbred racing in Queensland.”

The Toby and Trent Edmonds-trained Alpine Edge edged out a strong field of juveniles to claim the Dracarys Stallion Queensland 2YO Horse of the Year.

The colt set tongues wagging on debut when taking out the Listed Phelan Ready Stakes, going on to claim the Group 3 B.J. McLachlan Stakes at his next start before a brilliant second placing in the famed Magic Millions 2YO Classic on the Gold Coast.

Rothfire continues to build a reputation as one of Queensland’s most talented gallopers, being named the Ipswich Turf Club Queensland 3YO Horse of the Year.

Robert Heathcote’s star sprinter started a near-unbackable favourite in Sydney’s showpiece three-year-old race – the Group 1 Golden Rose – following a dominant victory in the Group 2 Run To The Rose, however an unfortunate injury sustained in the feature cruelled punters from seeing the best of Rothfire for the rest of the season.

Eloquently capped off a stunning season for her Toowoomba-based trainer Steve Tregea, being crowned the Raheen Stud QTIS Horse of the Year after claiming six QTIS-affiliated races throughout the season and more than $150,000 in QTIS bonuses.

Carioca was trained by Jack Booshand at Toowoomba in the post-World War II era, before making his name in Sydney with trainer Duck Hoysted and jockey Billy Cook, retiring with 20 wins from 44 starts.

Booshand’s famous brown and pink sash silks were synonymous with Carioca down south, where he claimed both the 1953 Sydney Cup, the Chipping Norton Stakes (1953 and 1955), an ATC Metropolitan, ATC Summer Cup, Theo Marks Quality Handicap and ATC Villiers Stakes.

Colin O’Neill’s career in the saddle heralded more than 500 winners and five Metropolitan Jockeys’ Premierships throughout the 1960s and 1970s, that included famous wins in Group 1 races such as the Doomben 10,000 (Tipperary Star), the Stradbroke Handicap (Prince Medes), and the Queensland Derby (Confidence).

Eric Kirwan is widely regarded as one of Australia’s greatest trainers of two-year-olds, winning all major juvenile races in the state aside from the Golden Nugget at least once.

His notable success with the juniors was not limited to horses, with champion Queensland jockey Chris Munce, among others, starting their careers under Eric’s guidance.

Joining Kirwan in the trainer category is the Strong family – Athol, Neil and Darryll – one of the most recognisable family names in Queensland racing.

The trio dominated the training ranks for more than 50 years respectively, with a number of champion horses including Doomben 10,000 winner Blue Finito.

Finally, the North West’s doyen racing family, the Ballards – Keith, Denise and Dan – were also inducted under the associate category.

At 68-years-old, Keith is still riding winners that his wife Denise trains, while Dan – a leading Brisbane apprentice throughout the late 1990s – is now a six-time Country Jockeys’ Premiership winner.

In total, 30 awards were handed out at the 2021 TAB Queensland Thoroughbred Awards at Brisbane City Hall earlier this evening.