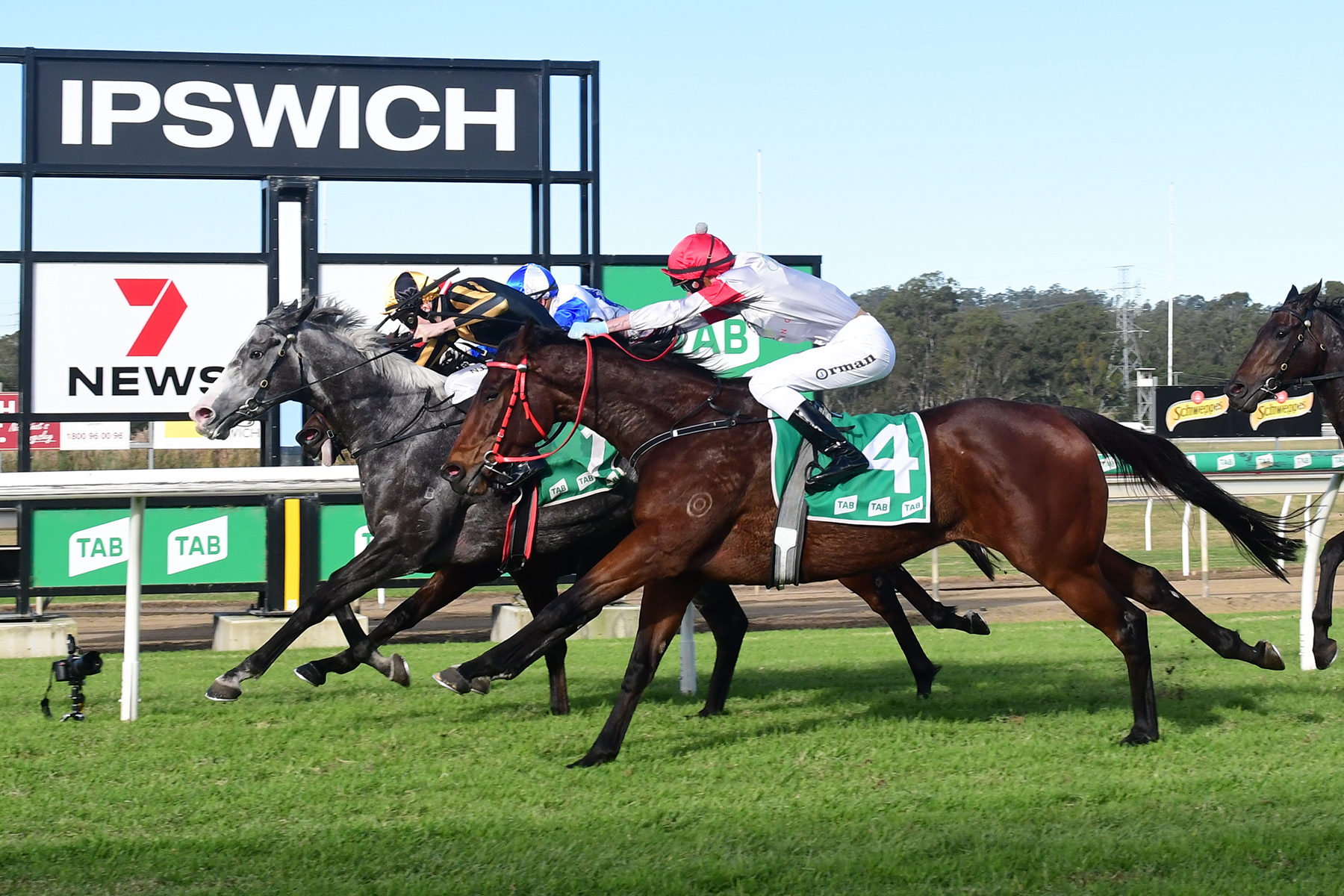 For the second time this week, the Ipswich Turf Club hosted an eight-race programme.

There was a crispness in the air that signalled the start of winter but importantly, Thursday’s meeting was run in the sunshine. It was close to a perfect winter day for racing.

While Sunday’s meeting was held on a genuine Heavy 10 track, after several windy days we started on a Heavy 8. By race 6, stewards upgraded the surface to a Soft 7.

It is not often that we see Sunshine Coast trainers at Ipswich particularly when they have the option of two meetings in the coming days on their home track.

Corbould Park’s leading trainer for the past eight years, Stuart Kendrick will be glad that he sent five horses to Thursday’s Ipswich meeting as his team walked away with a winning treble.

In the opening race of the day, the Folllow@IpswichTurfClub QTIS Three-Year-Old Handicap over 1710m, Choir Boy kicked the day off the right way for Kendrick.

The son of Divine Prophet had raced over sprint trips when in North Queensland but since joining Kendrick’s stable he has gradually stepped up in distance and on Thursday it paid dividends.

Andrew Mallyon gave Choir Boy a peach of a ride. He settled second before shifting off Birague’s heels in the straight and finishing off strongly for a 1.3 length win. It was win number three from 14 starts and there looks no reason why he won’t handle longer trips.

Race 3 of the day, the Ipswich Cup Tix On Sale Maiden Handicap, looked a tough race for punters.

It was a race of many chances with two of the better hopes, Exempt and Super Sweet, coming from the Kendrick yard.

One of Queensland’s most promising apprentices, Angela Jones, made full use of the inside gate aboard Exempt. She settled in the box seat right on the leader’s back before getting a split at the top of the straight and dashing swiftly to win by a length.

The win was the four-year-old mare’s first in five starts. Super Sweet caught the eye flashing late for third and we’ll talk about that horse more later in horses to follow.

While Justin Huxtable had to forgo the ride on Super Sweet due to not being able to make the 56kg, he was rewarded for making the trip to Ipswich for just one ride later in the day.

Striking grey Checkers is a horse that rarely runs a bad race and one that you’d love to own. Today’s win was his fourth in his past ten starts, all in 2022.

After jumping well, Huxtable settled nicely in fifth just a few lengths behind the leaders. Last season’s leading metropolitan apprentice improved approaching the straight. Known for his strength and ability to lift a horse, Huxtable got the best out of Checkers to run down Pivotal Motion in the shadows of the post.

Kendrick’s other runner, Wilmot Pass,  in the Sirromet Class 4 Handicap over 1350m flashed late for third.

It was a sensational day with three wins and two placing for Kendrick. The type of day that might see the likeable Sunshine Coast trainer back at Ipswich soon.

The Chris Munce-trained Delyth has been knocking on the door for a win.

The four-year-old mare has been in great form this preparation having finished third to the speedy Arentee first-up at Eagle Farm and then second by just half a length last start.

Despite drawing the outside gate in the 1200m Ray White Ipswich Maiden Handicap, punters rallied around the daughter of Spill The Beans backing her into $2.25 when the gates opened.

With Boris Thornton in the saddle, Delyth flew out of the gates to cross easily and take up a position outside the lead. As they straightened for home, the jockey with the wild haircut pushed the button and the pair raced away for what was a very easy 3.3 length win.

Delyth has had a number of setbacks throughout her career that has limited her to just four starts. However, based on what she displayed today, there will be more wins to come.

The win capped a big two days for the Watkins family who bred and own Delyth. On Wednesday at Doomben their red and white checkerboard colours saluted with Reeanon.

The TAB Venue Mode QTIS Two-Year-Old Handicap over 1000m looked the race of the day prior to the commencement of the meeting.

At least five of the runners looked to be of genuine city class standard.

From the moment the gates opened this race was drama packed. Angela Jones on Gossip Torque and Hannah Richardson on Princess Marian went like scalded cats vying for the lead.

The pair opened up a seven-length lead as they tried to set land speed records. While that was happening, just 100m into the race All That Pizzazz was crowded for room which impeded The Uprising and race favourite Blue Spinel. Unfortunately for The Uprising and Blue Spinel, that would be the only role they played in the race as they tailed out finishing a long way away from the winner.

The breakneck speed in front took its toll on the leaders but played into the hands of All That Pizzazz and Northern Express. Both horses came with strong runs with Northern Express claiming the win.

Apprentice jockey Jaden Lloyd piloted Northern Express and commented post race that it was the fitness of his gelding that proved the difference.

Northern Express was having his third start this preparation while Tony Gollan’s All That Pizzazz was on debut.

The Human ATM Makes Another Withdrawal

When the money comes for a Barry Lockwood runner, it is best to pay attention and follow that money as the stable don’t often get it wrong.

That was the case in Thursday’s Great Northern Ratings Band 0-62 Handicap over 1200m.

Known as ‘The ATM’, Lockwood put the saddle on Sea Palling who was having career start number four. The four-year-old son of Collate found considerable support late, coming in to as much as $2.70 before starting as the $3 favourite.

Ridden by Tiff Brooker, Sea Palling was slow to leave the gates and took some riding to settle five lengths off leader Mensa Maestro. Brooker needed to produce the persuader to try to make ground as they straightened.

Sea Palling was full of running with a furlong to go but didn’t have a great deal of room. Brooker pushed through, inconveniencing Regal Edition who hit the rail, before bursting clear to win by a length.

It was Brooker’s only ride of the day and while punters were pleased that she claimed the win, she may find herself on the sidelines for causing interference to Regal Edition.

A Big Future Lies Ahead For Wessel

Race calling is an art that very few can do. We’re blessed in Queensland with a number of great callers led by Josh Fleming.

The future looks bright for the race calling ranks with young Jarrod Wessel proving to be quite skilled in the commentary box.

Bundaberg boy Wessel called our Thursday card and was excellent across all eight races with well considered and accurate calling.

‘J-Wess’ is  definitely a star on the rise and will hopefully be heard at Ipswich for many years to come.

Race 3 - Super Sweet: As previously mentioned, the Stuart Kendrick-trained Super Sweet caught the eye in race 3. The Domesday filly was having her first start for Kendrick and just her second career start. Under Ben Thompson, she settled towards the back of the pack over the 1000m assessment. She was still near last with 200m to go but really knuckled down in the final furlong to take many lengths off the leaders. Watch for her as she gains fitness and races over further.

Race 8 - Neptune’s Choice: This was a big run by the Brian Smith five-year-old. He carried 60kg after the claim for Minonette Kennedy and was caught three-deep for the majority of the race. Despite that, he fought on well to finish third by just 1.3 lengths. The legendary kiwi trainer is set to back Neptune’s Choice up at the Sunshine Coast on Sunday where he will carry just 54kg with Sam Collett in the saddle.